Probably the largest solar hybrid system for a construction site in Singapore, the 3-phase 6.48kW hybrid solar system by Kamtexsolar, allows Lend Lease to power lights in their site office by solar and generator.

In June 2011, Kamtex was engaged by Lend Lease Singapore and Nylect Engineering to propose a stand-alone solar system to power hoarding lights at their contruction site for their new office-cum-shopping complex in Jurong Gateway. The system must also be able to tap onto grid power once it is up and ready. In the meantime, the solar system has to work with the existing generators to ensure that the generators kick in once the limited battery bank capacity drops too low. 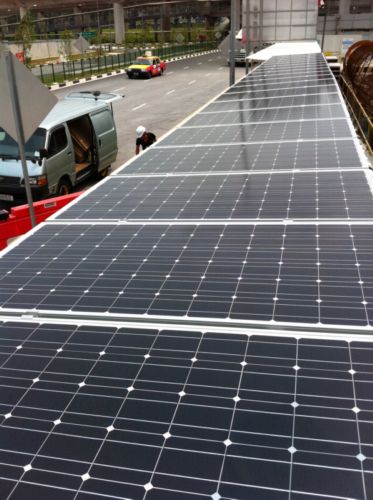 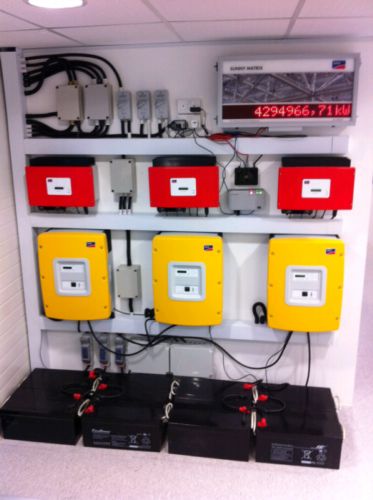 Kamtex was engaged again in early 2012 to upgrade the system to power specific sections of the level 2 and 3 flourescent lights for their newly constructed site office. The result was a upgraded 3-phase solar hybrid 6.48kW system. With future expansion in mind, it was fairly smooth upgrading the 2.16kW system to 6.48kW with our modular approach using 180W Kamtexsolar panels. The SMA Sunny Boy inverters were connected to the SMA Sunny Island off-grid inverters to create a 3-phase AC output. The system was also connected to the existing 3-phase generators on-site for backup.

Our products like solar pathlights, solar streetlights and solar floodlights are also perfect for remote locations with no grid power and rely on common polluting diesel generators. The overall annual operating cost of solar is lower than running diesel generators. Furthermore, there are no moving parts and no major maintance needed. A truly green and sustainable source of power for construction sites!